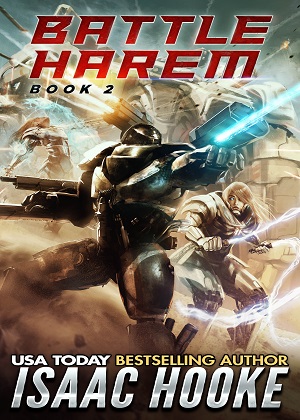 Alien rifts are opening throughout Earth’s uninhabited zone. The rogue AI Bokerov is stepping up his guerrilla assaults. And Jason is still trying to come to terms with his unexpected new role as the commander of a battle harem.

He was just a geek who decided to have his mind scanned, only to wake up inside a war machine in the middle of the uninhabited zone. Technically, he’s what is known as a Mind Refurb: a human mind trapped in the body of a machine. But thanks to a virtual reality simulation running within his AI core, sometimes he even feels human.

He has joined forces with five Mind Refurb women. They’re hot as sin in Virtual Reality and deadly as hell in the real world. Definitely not the kind of girls he would ordinarily mess with.

And now he’s their commander.

All of the women bring their own unique abilities to the table. Together, they have the potential to be unstoppable. If only they didn’t have that pesky thing called human emotions to hamper them. Jealousy, competitiveness, and inner demons have a way of messing up an otherwise well-oiled machine.

War is afoot. The aliens are flooding into Jason’s territory. Bokerov is testing his defenses. Jason knows it’s only a matter of time until a full-blown attack comes, and he has the team working 24/7 to fortify their base.

The question is: will it be enough? And more importantly, will Jason be able to shut down their humanity long enough to get the team members to fight as the cold, lethal machines they were meant to be?