To live as a man, he must die as a machine. 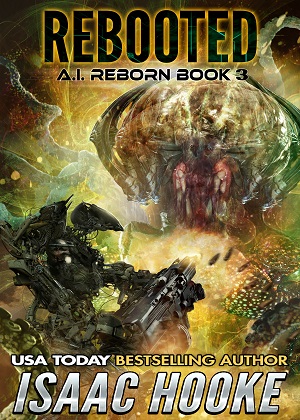 Eric and the Bolt Eaters only just finished saving the world when the aliens decided to return. Now the otherworldly mothership lingers in orbit, watching, waiting.

The people of Earth aren’t going to let those bastards strike first this time: the military has hatched a plan to destroy the alien vessel.

It probably won’t work. In fact, it’s a suicide mission.

Which is exactly why they’re sending in the Bolt Eaters: human minds implanted into the most powerful war machines ever created. If the platoon fails, they can simply be restored from backups and sent again. And again.

As an added incentive to their success, the military has dangled the carrot of freedom: if the Bolt Eaters triumph, their psyches will be installed into civilian robots and given ownership of their mind backups.