Betrayed by one of their own brothers. Trapped on an alien world. Struggling to survive. 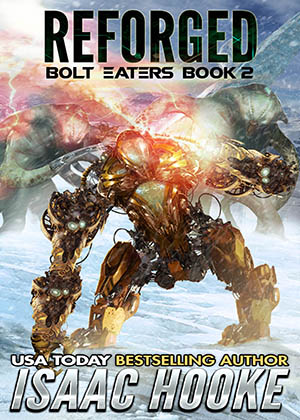 The mission was supposed to be easy.

Travel to an alien world on the far side of the galaxy, do some recon, go home.

But the operation proved tougher than expected.

Eric and the Bolt Eaters have been taken prisoner by a former member of their platoon, a Mind Refurb who has sold out Earth to the aliens.

Normally, Eric and the platoon members wouldn’t stand for such a blatant act of betrayal. It’s just too bad they’re all restrained aboard an otherworldly transport and scheduled for immediate disassembly.

Some days it really sucks to be a human-machine hybrid.