Alien bioweapons. Robots with human minds. One man's fight to retain his humanity. 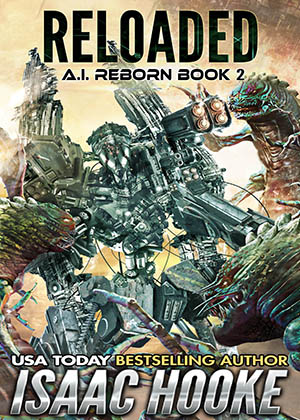 Eric never thought he’d live long enough to witness an alien invasion. He was right. He died 200 years ago.

But then the army decided to revive him, implanting his consciousness into the AI core of an advanced military killing machine. Right on the cusp of a visit from extraterrestrial invaders.

He and his platoon, the Bolt Eaters, now struggle to escape the clutches of the alien bioweapons that have a stranglehold on the planet. The team members grapple, too, with perhaps a bigger problem: their newly awakened emotions. It’s hard to be an effective killing machine when suddenly you’ve developed a conscience. Throw in a wildcard in the form of a rogue Russian AI that wants to slaughter them all, and the Bolt Eaters certainly have their work cut out for them.

As the tensions between team members rise, and the odds worsen, the Bolt Eaters do the only thing they can do, the thing they were programmed to do. They fight.

Eventually the platoon makes a discovery that could change the course of the invasion. Assuming, of course, that they can overcome their inner demons and survive long enough to use it.