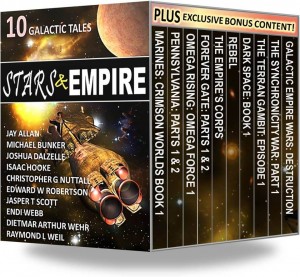 Ten of the most recognizable names in space opera.

My contributions to the bundle include Forever Gate Parts One and Two. In addition to the novels, several of the authors have thrown in bonuses, such as short stories, deleted scenes, and previews of upcoming releases.

These are deleted scenes from ATLAS that have never before been published.

When writing a novel, there are always so many good sections that end up on the cutting room floor. The reasons for their removal vary, and include: pacing, continuity, story flow, and so on. However, that isn’t to say the scenes aren’t good. Most of the time, they are.

In the boxset, you’ll find four of my favorite deleted scenes, including the original, unedited Chapter One that inspired the whole novel.

“Caterpillar Without A Callsign”

I’ve thrown in “Caterpillar Without A Callsign” for those of you who haven’t picked it up yet, a short story set in the ATLAS universe that focuses on the history of Snakeoil’s character.

My last bonus is a new time travel short story, “The Laurasians,” about a paleontoligist who has a chance to meet the living-and-breathing versions of the fossils he has studied his entire life.

This story has only been published once before in anthology form (in “Synchronic: Thirteen Tales of Time Travel“), and I’m including it here as a special bonus.

The full-length novels you’ll find in this boxset, including my own, are as follows:

Together, these novels retail for about $15, but you’ll be able to grab them, along with all the bonuses, for the incredibly affordable price of $0.99.

Thanks for your support!