If you could destroy a densely populated colony world to prevent an alien race from ever attacking humanity again, would you? 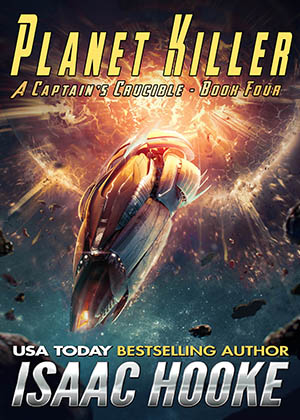 The Raakarr have been repelled. For now. But all-out war seems inevitable.

In a surprise move, the Zarafe faction of the Raakarr gives the United Systems a map to key colony worlds owned by the aliens. One of those colonies is responsible for the production of eighty percent of the fuel used by the alien starships.

The United Systems government ponders deploying a planet killer to this world. Initially intended solely for deterrence, the hellish superbomb will rip the crust clean away from the colony, killing everything.

While these high-level deliberations take place, Jonathan faces a court martial for his actions in Vega 951. Meanwhile his ship, the USS Callaway, remains stranded with Task Group 72.5 in a remote galaxy.

Will Jonathan and the Callaway be a part of this final operation? Or will the fleet elect to deploy the planet killer without them, ending the war before it even begins?