Human minds stranded in machines. A platoon trapped on a faraway world. Bloodthirsty aliens who will stop at nothing to bring humanity to its knees. 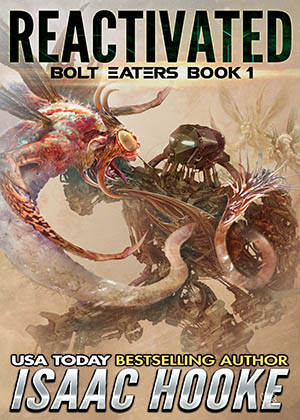 Eric was happily retired. His consciousness resided inside the body of an advanced android. He had two beautiful female companions, a platoon of war hero friends, and the entire floor of an apartment building to call his own. He had paid his dues, having saved the world during his previous stint in the army, and now he could live out the rest of his life in peace and quiet. As an android, he expected that life to last a very long time.

And then the army came knocking at his door again.

Soon he and his platoon find themselves dispatched to an alien world. Piloting Devastators, mechs equipped with enough firepower to take down a small army, Eric and his platoon are scouting the planet ahead of a planned human invasion.

When things start to go very wrong, and the platoon finds itself cut off from support and surrounded by enemies on all sides, Eric begins to wonder if it will truly be humanity doing the invading, and not the aliens.