The saga continues as the ATLAS team faces an apocalyptic threat from deep space. 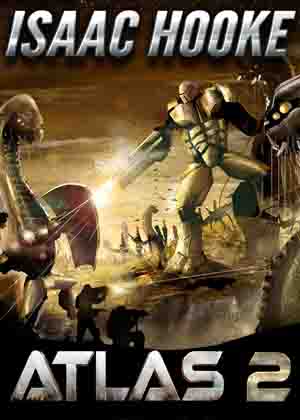 The desperate battle on far-flung Geronimo may have ended in a qualified victory for the elite MOTH soldiers in their devastating, atomic-powered ATLAS mechs…but the cost was a massive one, paid in blood. Rade Galaal, graduate of the toughest military training in the universe, barely survived the terrifying mission in deep space that claimed the lives of the two people he couldn’t afford to lose: a comrade who was more than a brother, and someone who was his whole world.

Lost, broken, and questioning his place as a MOTH and as a man, Rade faces a new crisis when an enemy force—a terrifyingly familiar one—threatens the future of humanity itself. Entering human territory from the depths of uncharted space where Rade lost everything, this massive alien vessel wears the face of death.

Once the nightmarish invader begins threatening total annihilation, can Rade and his team hope to prevail…or even survive?

“I thought this novel was outstandingly cool. It was a great followup to his atlas 1 book. Our characters seem to grow and develop. I love the split story between the main characters and how they survived. The tech seems to get different and cooler and little interesting quirks of their use comes up. His military jargon is there but not so much that it bogs down the novel into a Honor Harrington style dialogue of techiness. So if you loved the first book, read this one. He’s still going strong.”

“Rade and the MOTH’s find themselves on the same side of humanity as the Sino-Korean’s fighting for their right to exist.
The evil aliens have found their way into Sino-Korean space to eliminate everyone. Now humanity must work together to stop them. Great follow up with several surprises that leave the listener trying to follow the next moves of the UC and a couple of surviviors of the first encounter. I have listened to it twice and find there is so much going on a third time is warranted and wanted. This is one of my favorite audiobooks.”

“I’ve read a good amount of military sci-fi and not many grasp the personal relationship of a squad caught in the middle of an engagement as well as Isaac Hooke does in his ATLAS series. A great understanding of combat and physics are needed when trying to relate the image of people floating around shooting at each other in the void, and he does a wonderful job. Thanks for a great read and I can’t wait for the next.”