A warlike alien race. A stranded platoon. One man's fight to save his brothers—and humanity itself—from total annihilation. 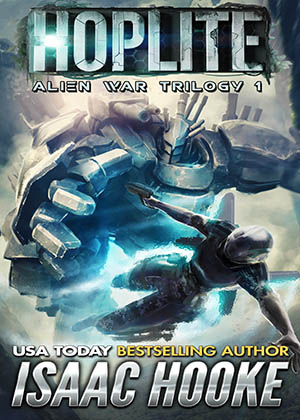 Rade Galaal and his elite team are dispatched to the farthest reaches of known space to investigate the disappearance of a classified new supercarrier.

Equipped with Hoplites, powerful battle suits laden with enough firepower to raze a small city, Rade and his team explore the barren world where the starship issued its final transmission.

But shortly after they land, things start to go very wrong.

Cut off from the fleet, stranded on an unforgiving planet, and surrounded by hostiles, Rade and his men find themselves fighting for their very lives against a seemingly unstoppable foe. Even the awesome firepower of the Hoplites might not be enough.

Can Rade overcome his demons in time to save the platoon, or will his team become the first casualty of the coming Alien War?