An alien entity has stolen a time weapon. 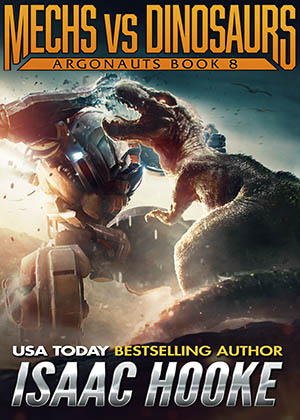 Rade and the Argonauts must retrieve the weapon and travel back sixty-five million years to ancient Earth to stop the entity from intervening in humankind’s evolution.

The stakes are high. If the team fails, they will return to find a galaxy populated not by humans, but by the descendants of the dinosaurs.

The mission won’t be easy. Ancient Earth is ruled by giant meat-eaters who are just as happy to dine on the Argonauts as on the natives. The team does have one small advantage: their Hoplite battle suits, war machines packed with enough firepower to smash a small army. But how effective are the suits against building-sized predators?

As the raging hordes of carnivores close in, the stage is set for the ultimate battle: Mechs vs. Dinosaurs.