The survivors of Battle Group 72 are stranded on the fringes of known space. Cut off from Central Command, with time and resources running out, the fleet struggles to build a Gate home before enemy reinforcements arrive. 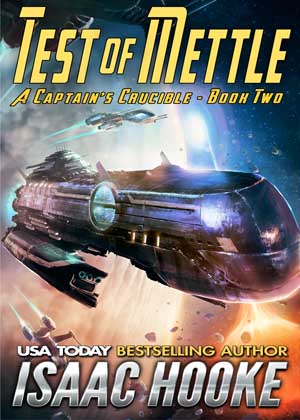 Hopelessly outnumbered, Captain Jonathan Dallas, commander of the flagship, chooses to escape through the newly completed Gate. But what the task group finds on the other side changes everything.

The brave men and women under Jonathan’s command have already proven themselves in the heat of battle, but now he must further test their resolve, not to mention his own. With enemies at every turn, it seems combat against overwhelming odds is inevitable.

The path Jonathan chooses is laden with danger. One small mistake can lead to the ruin of the entire fleet. Will he steer his intrepid battle group through the stormy waters of the current crisis? Or will he fail, dooming them all to cold deaths in the void, captains and crews going down with their ships?

It is a trial like no other. A crucible that cannot be won with strength alone.

It is his greatest test of mettle yet.