One man's otherworldly quest to save the people he loves 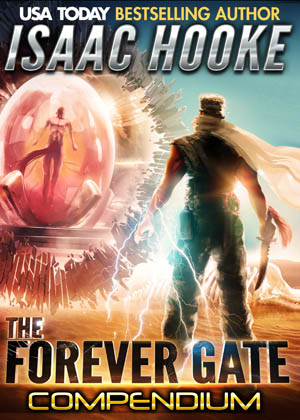 The world as we know it is about to end.

Hoodwink Cooper has been sentenced to death. His crime? Attempting to blast a hole in the Forever Gate, the colossal wall that surrounds the city and protects the denizens from the uninhabitable Outside.

As the gols, the humanlike automata who rule the city, prepare to carry out his sentence, a rogue faction plots even greater turmoil. Hoodwink’s daughter is embroiled with this cabal, and if Hoodwink gives up the ghost without first extricating her from their clutches, she will most likely join him in the afterlife. What Hoodwink and the cabal members don’t realize is that they are all pawns in a greater game whose stakes are the very survival of humanity as a species.

Will Hoodwink escape in time to save his daughter? More importantly, will he break free of the invisible forces that guide him? Or will he succumb to the domination of his unseen masters and cause the breaking of the world, losing not just his daughter, but everything?

THE FOREVER GATE combines elements of science fiction & fantasy to evoke a unique setting entirely unlike anything you’ve ever read before.

The book originally started life as a 24,000-word novella. In the first two weeks of its release, that novella sold 1,000 copies without any promotion whatsoever. What began as an experiment turned out to be something of a cult hit. Isaac Hooke soon decided to expand upon the concept presented in the novella, and created four more volumes of increasing size. Each volume consistently shot to the top of the Amazon short-story best-seller list, and on March 20, 2013, it won the Indie Book of the Day award.

The compendium edition is the compilation of these five volumes.

5 SHORT NOVELS. 160,000 words. 628 pages. Strap yourself in, because the mind-bending thrill ride that explores what it means to be human has only just begun.

“I can’t say the tiniest thing about the plot without giving away the surprises, and the fun of this book rests largely on those surprises. I can vouch that I was taken off guard over and over again. The big reveal involving Hoodwink? Hats off to any reader who saw that coming. Hooke doesn’t cheat on his withholds, though. He cunningly switches points of view so that we’re usually in the head of the one character who has the least idea what’s really going on.”  – Felicity Savage, Amazing Stories Magazine

“Picked up the first installment, as I often do with indies. When I finished that, I went right back and bought 2, 3 and 4, reading them right through.”

“I have been an avid sci-fi reader since childhood, and THE FOREVER GATE really grabbed me. I love a story in which the nature of reality is questioned, and turns out to be stranger than almost anyone can imagine.”

“THE FOREVER GATE made my blood pump, and gave me a lot to think about when I was finished. Which is basically all I’m asking for in a story.”