One man's final fight to save those closer to him than brothers. 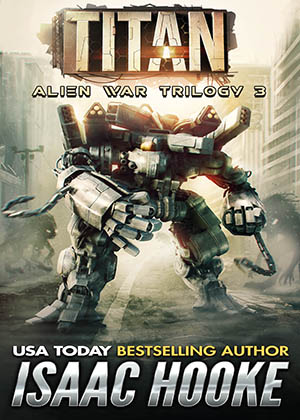 The human fleet has razed the alien homeworld, reducing it to a barren rock blackened by nuclear winter. Only a few survivors remain.

Equipped with the awesome might of the Titan battle suits, war machines with enough firepower to smash a small army, Rade and his platoon have been dispatched to the homeworld to hunt down the survivors of the nuclear bombardment and erase the alien threat from the galaxy forever.

Unfortunately, it seems the aliens don’t want to go down without a fight.

Rade soon realizes the human fleet has made a grave error in judgment. There are more than a few survivors. Much more. And most of the planetary defenses are still intact.

When Rade and his Titans find themselves stranded without backup or support, he must call upon all of his training and inner strength if he hopes to lead his men to safety. But where do you go when you’re trapped behind enemy lines and a whole planet is against you?

Download the explosive conclusion to the Alien War trilogy and find out.