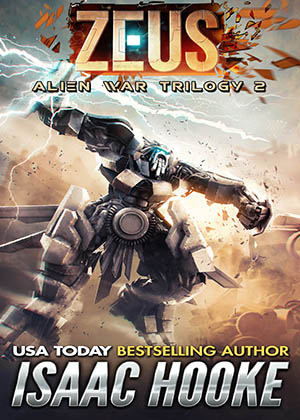 The enemies have raised the stakes by attacking a colony world on the outskirts of known space.

Rade and his team of elite warriors join a Marine division to retake the colony while the human fleet battles it out with the alien forces in orbit.

This time Rade’s platoon is equipped with the fearsome power of the Zeus mechs–war machines that harbor electrolasers capable of discharging a billion volts of electricity per shot. You’d have to be an idiot to stand up to one of these.

Tell that to the aliens.

During one of his intense sorties into the fallen capital city, Rade makes an important discovery that could completely change the course of the war, not to mention his own life.