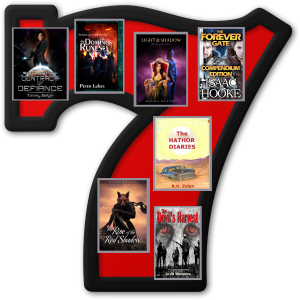 Myself and the authors below are part of a seven-day-long blog hop. For the next week, we’re each running a giveaway where you have a chance of winning a 7+ ebook bundle. Each giveaway has different entry criteria. So visit all the sites below for a greater chance of winning.

Rules For Winning On My Site

Sign up for my new release notification list here. That’s it. Check back Friday, October 24 when I announce the winner. I’ll also be making an extra special, top-secret announcement about my upcoming novel this Friday that you won’t want to miss.

An ecopy of your choice, mobi or epub, of EACH of the following novels (plus a special Advanced Review eCopy of my upcoming novel when it comes out — I’m also throwing in a HARDCOVER Advanced Review Copy to the winner on this site ONLY).

Contract of Defiance, Spectras Arise Trilogy, Book 1
In a few hundred years, the Algol system becomes humanity’s new home. The question is: is it a better one? When a crew of arms smugglers botches their latest job, Corps-deserter and crewmember, Aly Erikson, is separated from her brother, the only person she can trust, and left behind to fight for her life. In the aftermath, as she tries to piece together what happened, a crew of roughneck settlers pressgang her into a dangerous mission in the heart of Corps territory. Time is running out to get back everything she’s lost: her crew, her brother, and her options. But no one is taking her gun.

The Devil’s Harvest
Set in the same alternate history universe, the stories of the Carpathia Timeline stand alone, although some characters appear in both books.

France, 1916: The Great War in Western Europe is at a stalemate with the Allies and Central Powers facing each other from muddy trenches on either side of the deadly No Man’s Land. To end the years of bloody warfare, the Germans plan to unleash the perfect weapon in a villainous attack that will guarantee an unconditional victory over France and Britain.

Bullet-proof and impervious to shellfire, a horde of the undead is about to sweep over Europe in a wave of unrestrainable death. Except no one told the Germans two things: anyone killed by the bite of a zombie becomes a zombie … and zombies don’t pick sides.

To stop the Germans, an elite team of British soldiers led by Major Daniel O’Brien set out on a daring raid behind enemy lines. But in war no plan survives intact, and when the Germans lose control of their perfect weapon O’Brien’s group, including two vampires and a raconteur dame, must fight their way aboard a highly-armed German airship to halt the spread of the zombie plague throughout Europe.

The Devil’s Harvest, an action-packed Steampunk/paranormal thriller and the second book in The Carpathia Timeline, is set thirty years after the events of Carpathia.

The Dominus Runes
Thomas Gianmarco likes his liquor strong, his women plentiful, and his friends well-armed. While the rest of the human race is barely surviving in the rubble of destroyed cities and scorched countrysides, he enjoys a life of debauchery through the spoils of his contraband empire.

Until he kills a Commander of the Titan Army, capturing the attention of the overlords who have subjugated humanity. The supernatural forces are on the verge of war, and Gianmarco finds himself caught in the middle of powerful competing interests. Some want him dead, but others want him alive, and working for them. Will he be able to transform from rogue to rebel in order to survive?

Gianmarco is a master at leveraging the perfect deal. But this time, he’s the item for sale, and the art of this deal could change the course of human civilization forever.

The Light & Shadow Trilogy (That’s right! Trilogy!)
It has been only two generations since Arthur Warden seized the throne of Heddred from the Conradines, and now the crown rests on the head of Garad, sickly and weak. Shadows gather: legacies of the centuries-long rivalries for power, old betrayals, the endless plots of the courtiers, and the murmur of rebellion in the southern provinces…

Catwin, plucked from her life at the edge of the Kingdom, is thrust abruptly into the world of the Court when she is chosen by the Duke of Voltur to be a Shadow—spy, shield, and blade—to his niece, the Lady Miriel DeVere. The Duke’s ruthlessness is legendary, and he will stop at nothing to become the power behind the throne, using Miriel as a pawn to catch Garad’s heart.

But the Duke’s carefully-laid plans are only a piece of the intrigue of the court, and greater forces than Catwin can imagine are massed against her, determined to eliminate Miriel and impose a new order of their own. If Catwin and Miriel are to survive, they must learn quickly who to trust, and when to turn their skills against the very people who have trained them…

Rise of the Red Shadow
Every story must begin somewhere. For the warrior who would come to be known as the fearsome Red Shadow, the story began in a forgotten glade deep in the land of Tressor. It was there that a pair of trackers, eager to retrieve a lost slave, instead found an orphaned malthrope. Had it been a human, it might have been treated with compassion, but in the eyes of human society a malthrope was a monster, a mix of fox and man believed to be a murderer and thief by its very nature. The beast was to be sold for a handful of silver, but fate intervened in the form of an old blind slave named Ben. Under the learned hand of the one human who believed in his potential, the young malthrope would instead be given the wisdom to take his first steps on the long journey to his destiny.

The Rise of the Red Shadow chronicles the early life of one of the most mysterious figures of the Book of Deacon trilogy, the creature called Lain. It tells of his years working and learning on a Tresson plantation until a dark day of vengeance and bloodshed finally set him free. From there you will follow as he finds his place in the world, learning what it is to be a malthrope, and turning to the purpose that will guide him for the rest of his days. It is a story of love, hate, and lessons hard-learned, revealing the painful choices one must make to become the hero the world needs.